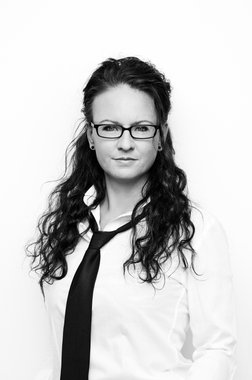 Butschkow is a Danish writer and the author of a number of published works of fiction, including two volumes of short stories and

Butschkows stories has been published in The Literary Review, Columbia: A Journal of Literature and Art, Storm Cellar, Exchanges, The Wilderness House Literary Review, K1N and The Missing Slate. Her short story Jomfru Ane Gade was nominated for

Julia Butschkows earliest works include a volume of poems, a collection of short prose and a play, that has been staged in

Among other distinctions, Butschkow has received the

Butschkow wrote the story Requiem in 2012, a commissioned work for the National Gallery of Denmark.

In 2011 Butschkow published the volume of short stories Der er ingen bjerge i Danmark ("There Are No Mountains in Denmark") in which the story Lauge appears.

Published in The Cossack Review

Translated from the Danish by

Lauge is wearing his father's orange- and blue-striped shirt; it's wrinkled and comes down almost to his knees. On his feet are the black shoes his father was wearing when he married Lauge's mother. On his nose Lauge has a round red plastic nose from Fetter BR.

Before they left this morning, his father painted two black crosses around Lauge's eyes so he looked like one of the clowns from Cirkus Benneweis.

"When will the lines be gone?" asked Lauge.

"In a few days," his father answered.

In the gym, next to Lauge's father, stands a fat boy's mother. She has curly yellow hair and barrettes with artificial flowers in her hair. Her breasts are so big they look as if they are about to fall out of her dress. Her eyelids are painted light blue, and her green eyes constantly rest on Lauge's father, who has slicked his hair back with Brylcreem today and is wearing his old biker jacket. The lady's teeth are too big; she laughs loudly, with her mouth open, every single time Lauge's father says something. Even if it isn't funny.

For a brief instant the lady takes her eyes off Lauge's father and looks down at Lauge.

Down at the oversized shoes and the overlong shirt. She laughs. Loudly and for far too long. And she lays her hand on Lauge's father's arm. She points down at the shoes and laughs.

The lady laughs. Lauge's father bends down and pulls the red nose out a little so the elastic is stretched. He lets it snap back against Lauge's cheeks. And laughs.

"You're a little too serious, mister," he says.

"One's supposed to laugh when one's a clown," says the lady.

Lauge feels that all the people in the gym turn toward him and stare at him. At the big shoes and shirt. The round nose shining much too red in the middle of his pale face. He wants to go home. But says nothing to his father. He grinds his molars and forces the corners of his mouth upward.

Suddenly it's Lauge's turn to strike the big barrel hanging in the middle of the gym; he's barely noticed that he's been standing in line. Now a heavyset red-haired man dressed as a soccer referee hands him a baseball bat.

Lauge feels that all the people around him have stopped breathing; they're looking at him without saying anything like people at Benneweis when the arena is lit only by a single spotlight. Low drumming is heard from the balcony, the darkness smells of sawdust, and in the middle of the arena stands the artist, ready to execute his special art.

Lauge stands with the heavy baseball bat in his hand. He sweats. He feels how the audience is waiting for him. Waiting for him to do something funny or something idiotic. Something they can laugh at. Shout, whistle, point their fingers at.

Lauge wants to run away. Out of the gym. Out of the big yellow building. Out onto the road, through the city. Out onto the freeway. Run, sprint. All the way through Denmark, over the border, through Russia, all the way to Japan. Run to the end of the world. And stop only there at the abyss: throw himself into space.

Fall or float-out into nothingness.

The baseball bat becomes heavier and heavier for every instant that passes. Lauge is now sweating so much that the long shirt sticks to his skin. He breathes silently. If he doesn't connect, if the bat slips from his hands before he hits the barrel, he's done for.

When he starts school, he'll sit on a chair at a table at the very back of the classroom. The other pupils will turn around and look back at him and laugh. Even the teachers will laugh. All of them will notice it: the red nose that has merged with his cranium, like Pinocchio's nose. He'll always have to wear it, even at night. Even when he grows up. If he doesn't hit the barrel now, he'll never be anything but a clown.

At times Lauge's father breaks the silence in the gym by whistling and clapping.

Lauge can also hear the lady's loud laughter somewhere in the gym.

For some reason he can't move; it's as if his feet have been nailed to the floor. The looks aimed at him from all sides bore into him and make him dizzy. He stands in the middle of the gym with the baseball bat in his hand. The world stands still around him. His father has stopped whistling and clapping. The lady has stopped laughing. No one says anything. Not even the big trees outside the windows, above the bars, are moving. They are looking and they are listening. It's Lauge who is to set the world in motion. It's he who must break the silence in the gym. Everything is bewitched. Like in a fairy tale. And it's Lauge's task to lift the curse.

Bring everything back to life.

Lauge stands with the baseball bat in his hand and thinks of his mother. Imagines her watching him from heaven together with God and all the others up there. She's smiling. Her skin is just as white as when he and his father saw her for the last time, in the chapel, before she was buried. Now she lives up in heaven; Lauge knows this. She lay in her fine coffin and slept, and while she slept wings grew from her shoulder blades. When she woke, she flew.

And now she's up there, somewhere behind the mountainous clouds, and sees him.

Before she died, she studied Japanese at the university. She showed Lauge the beautiful letters and told him stories about rice farmers and geishas and dragons. She taught him to say hello and goodbye in Japanese. She taught him to count to ten. And she taught him words like dojo and satori. A dojo was a place like a gym in which karate was practiced. Satori was the instant at which all thoughts stopped. Like the heart stopped the instant one died. But Lauge's mother had explained that in satori one was not dead but intensely alive.

The word suddenly washes through Lauge like a tidal wave that carries away all thoughts in an instant. He lifts the baseball bat. Grits his teeth. Sweat runs down his forehead. He grips the bat with both hands. It's all or nothing. The wave washes through him. He gets a running start. Runs. The barrel approaches. He throws the whole weight of his body into the blow. Screams. Hurls the bat against the barrel so it splits. The bottom falls out. Candy and oranges, stuffed animals, balloons of many colors fall out.

"There you go, man!" his father shouts somewhere.

Everyone in the gym claps.

Lauge lowers the bat, and he smiles, drenched with sweat. He stands in the midst of everything; everything is in motion again. Children run up from all sides, stumble, reach out and shout, yank at each other's clothes and hair, while Lauge lets the bat slip out of his hand.

Then everything turns black.

Lauge wakes up on a mattress in a corner of the gym. The mattress is green. And it's cold. His father is sitting next to it and looking at him. When Lauge opens his eyes, his father pats him on the cheek.

The lady is standing nearby and smiling much too much. She takes a bottle of beer from a table, opens it, and hands it to Lauge's father.

Lauge sits up on the mattress. His head is pounding; his father smiles and points at it; Lauge feels it. On top of his head is a crown of paper attached by means of a silk band beneath his chin.

The lady laughs. Her big teeth. Her breasts bounce.

Her fat boy still has his Spider-Man costume on. He's sitting on a folding chair stuffing cake into his mouth.

"Would the king like a piece of cake?" the lady asks.

"Then I don't want any," Lauge mumbles.

"What's he saying?" the lady asks.

Lauge's father finishes his beer and sets the bottle down.

"Damn, you're in high spirits!" he exclaims, smiling broadly at Lauge.